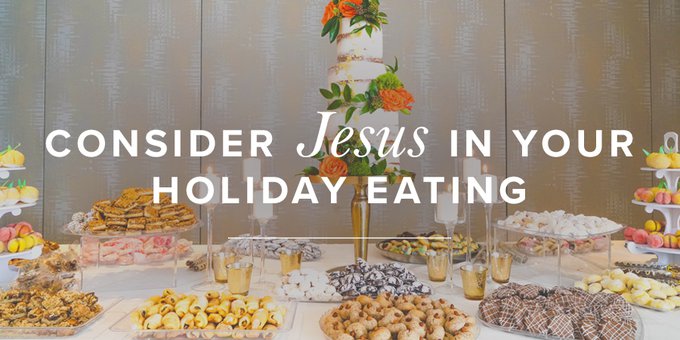 25% 25%
Give Today Give Today
Editor’s Note: As we head into the holiday season, we want you to be prepared to focus this Christmas on who matters—Jesus. Today’s post will introduce you to a brand-new resource to do just that: Consider Jesus: A 31-Day Advent Devotional by Nancy DeMoss Wolgemuth.

It’s safe to say, I believe, that no other holiday is so readily identified with food as Christmas. Thanksgiving, of course, is a close second, yet its favorite tastes and dishes are generally confined to a single day’s meal (followed, of course, by the plentiful leftovers). Christmas, though, with all its customary gatherings and childhood memories, can lend itself to weeks of opportunities for sugary indulgences, rich hors d’oeuvres, and sumptuous meals.

I’m guessing, then, that you understand the common Christmas feeling of being full but still wanting to eat. (I’m not judging, you understand. I’m relating!) And while we may at times feel justified in partaking of an extra helping or two of seasonal delights, the fact remains that such indulgence is often simply our flesh wanting to have its own way. We want what we want, and we don’t want to be told that we can’t or that we shouldn’t.

The enemy, when tempting Jesus in the wilderness (Matt. 4:1–11), appealed first to His physical appetites. Jesus, you may recall, hadn’t eaten in nearly a month and a half. He could not have been human and completely avoided the idea that after forty days He deserved permission to break His fast. But His battle that day, though obviously different from our Christmas struggles in the extreme, still hinged around the same issue as when we ponder whether to stop by the pantry on the way to bed tonight.

It’s the issue of Who’s in charge here?

It’s the question of Will I surrender to God’s lordship in my life, or will I insist on running things myself?

By the time we see Jesus in Gethsemane, praying those earnest, heartfelt words, “Not my will, but yours, be done” (Luke 22:42), we’re witnessing fruit from an entire life of complete, glad, wholehearted, consistent surrender to His Father. As awe-inspiring as His willingness to endure the cross sounds, it actually just follows the trajectory He’d set with each day He lived on the earth.

“The Son can do nothing of his own accord,” Jesus said early in His ministry, “but only what he sees the Father doing. For whatever the Father does, that the Son does likewise” (John 5:19). “I have come down from heaven,” He later told His disciples, “not to do my own will but the will of him who sent me” (John 6:38). He elaborated on this theme again and again: “I do as the Father has commanded me” (John 14:31). “I always do the things that are pleasing to him” (John 8:29).

Our question around the snack table at this week’s Christmas party or family get-together is really the question that should govern every moment of every day. Who makes the call? Who gets to say? Who do we allow to win this battle of wills?

Jesus doesn’t make it easy, but He does make it simple. We are to remain obediently surrendered, walking in step with the Word and the Spirit of God.

Where are you most feeling the battle today between your will and God’s? Who will win? Which choice, if you made it right now, would declare your surrender to Him?

Dear heavenly Father, I know that the desires You have given me flow from Your goodness. You intend them to lead me to blessing, to enable me to find my joy and satisfaction in You. Help me not to be persuaded by my own or my enemy’s logic, but to gladly say “yes” to You, knowing that will result in what is truly best for me. I choose You both now and always. In the all-sufficient name of Jesus, amen.

This post was taken from Consider Jesus: A 31-Day Advent Devotional by Nancy DeMoss Wolgemuth. Click here to request your copy and start preparing your heart for Christmas.