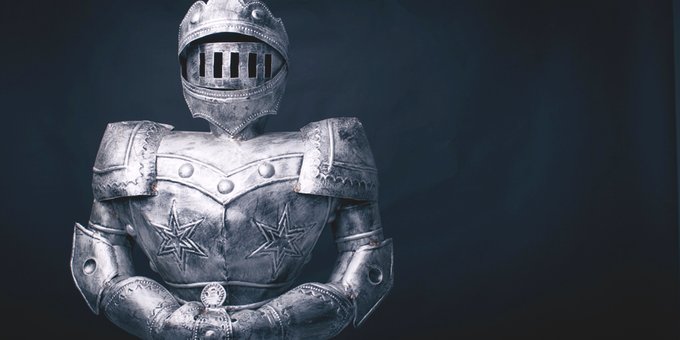 Clothed in the Armor of Christ

If you grew up in the church, you probably remember Sunday school or children’s church lessons about the armor of God. Perhaps you built a shield of faith out of a cardboard box or a sword of the Spirit from an old wrapping paper tube. Regardless of the base, aluminum foil was surely involved.

Ephesians 6:10–17 is a passage just waiting to be turned into an object lesson. However, it’s also a passage often ripped out of its context in the book of Ephesians. We fail to remember that the exhortation to “put on the full armor of God” comes at the very end of the epistle as a conclusion to much explanation and application of one major idea: You are in Christ, and you must live like it.

The concept of being “in Christ” doesn’t get the airtime that it should. I say that not just because it’s my opinion (though it is), but because it’s a major concept throughout the entire New Testament. Paul uses this terminology repeatedly throughout his letters, never missing an opportunity to remind believers about their status in Christ.

Perhaps the reason we don’t hear enough about this is that it’s difficult to explain. In fact, it can be downright confusing. This brief article might create more questions than it answers—but that’s okay because it will mean that you’re thinking about the idea. And that’s a start.

Before we return to Ephesians, let’s consider a verse from the preceding book: “For those of you who were baptized into Christ have been clothed with Christ” (Gal. 3:27, emphasis added).

This word picture helps us understand our union with Christ in terms of clothing. This doesn’t mean that we don a Christ-themed costume at salvation. Rather, it means that we are enveloped in Christ and that our identity is found in Him.

Comedian Jerry Seinfeld notes that sports fans really just cheer for laundry. For example, when longtime Green Bay quarterback Brett Favre signed with the Packers’ bitter rival, the Minnesota Vikings, Packer fans booed and shunned the very man whom they had adored and cheered for years. Why? Was he a different person? Had he committed some heinous crime? No. He was wearing a different uniform. He had changed his clothes. Our clothing identifies us with something.

As a believer, this goes much deeper. As a follower of Jesus, you’re not just identified with Christ; you are actually clothed with Christ. Author and pastor Rankin Wilbourne explains it this way: “Being in Christ is to discover our true, God-given identity. You are alive in him, moving with him through this world, clothed in all his benefits and blessings. You are in Christ.”1

If that’s still a little fuzzy, stay with me. Let’s keep this idea in mind and go back to the armor.

The Armor Is Christ

Paul tells the Ephesians to “Put on the full armor of God so that [they] can stand against the schemes of the devil” (6:11). We’ll consider this command in a moment, but let’s first consider each of the articles of clothing included in this armor.

The Belt of Truth

Paul first says to put on the belt of truth. The need for truth is apparent. How can we possibly begin to defend ourselves against the “father of lies” (John 8:44), if we don’t know what truth is? We cannot, as pop culture would counsel us, “live our own truth.” Such an oxymoronic concept contradicts the very notion of truth.

Truth is not a social construct, a “narrative,” or a feeling. Truth is a Person, and His name is Jesus. From His own lips He said, “I am the way, the truth, and the life” (John 14:6, emphasis added). Jesus is the truth. Therefore, the first piece of the armor is not an idea; it’s not a doctrine or a concept. It’s a Person. As we abide in Him and His words abide in us (John 15:1–8), we can know and discern truth. This abiding is possible because we are in Christ; we are clothed in truth.

The Breastplate of Righteousness

Next, Paul tells the Ephesians to strap on the breastplate of righteousness (6:14). Righteousness, like truth, is under constant assault today. Our adversary’s world system, as it has for millennia, loves to call evil good and good evil. True “uprightness” is the butt of jokes and bears the brunt of persecution. As followers of Christ, we are called to pursue righteousness (Titus 2:12), but we also must recognize that in Christ we have been declared righteous. That’s what it means to be justified: “Therefore, since we have been justified by faith, we have peace with God through our Lord Jesus Christ” (Rom. 5:1, emphasis added).

Righteousness, however, is not just a concept. It’s a person—Jesus Christ.

The breastplate of righteousness comes not by ourselves and our own intrinsic righteousness, but from Christ (Titus 3:5). Guilt is gone and shame is banished.

The Shoes of Peace

Are you beginning to get the idea? Let’s keep going. Next up is the somewhat confusing “feet sandaled with readiness for the gospel of peace” (Eph. 6:15). The gospel of peace. This is much more than cessation from conflict or an inner transcendental state. This is peace with God. Which, of course, we have only through Jesus.

Consider Romans 5:1 again. “We have peace with God” because of Jesus. Earlier in Ephesians, Paul tells the church in Ephesus that Jesus is our peace. He breaks down the wall of division between Jew and Gentile. He makes peace where there was once hostility (Eph. 2:14). And the prophet Isaiah foretold that the Son would be the “Prince of Peace” (Isa. 9:6).

Peace isn’t a state of mind. It’s a Person. And the peace that He gives is a peace the world cannot give, explain, or comprehend (John 14:27).

The Helmet of Salvation

The cry of the psalmist is fully realized in Christ:

Who is the LORD of whom this verse speaks? Christ Jesus it is He!

Jesus is our armor. We are clothed in Him!

Perhaps at this point you’re saying, “Okay, I think I’m starting to get it. I’m clothed in Christ, so all of these things that belong to Christ now belong to me. So why does Paul tell me to put on the armor if I’m already wearing it?” The answer to this question is the same as the reason that Paul prayed this for the Ephesians:

I pray that the eyes of your heart may be enlightened so that you may know what is the hope of his calling, what is the wealth of his glorious inheritance in the saints, and what is the immeasurable greatness of his power toward us who believe, according to the mighty working of his strength. (Eph. 1:18–19 CSB)

We are, as Paul Tripp is fond of saying, spiritual amnesiacs. We often live as if we’re not clothed in Christ. To return to my Brett Favre analogy, imagine if when the Vikings played at Lambeau Field in Green Bay, Favre entered the Packer locker room all decked out in his purple and gold and started asking the coach what the game plan was. He probably would have been ushered out by security.

As absurd as this scenario sounds, don’t we often do the same thing? We live as if we’re still wearing rags of filth instead of the righteousness of Christ. Because of our amnesia, we need to return often to the cross—not for salvation but to remember. We need to recall the new identity we’ve been given in Christ.

The call to put on the armor is a call to remember that we are already clothed in Him.

Previous Post Is It Okay to Pray for a Husband?
Next Post What’s the Best Bible for Me?