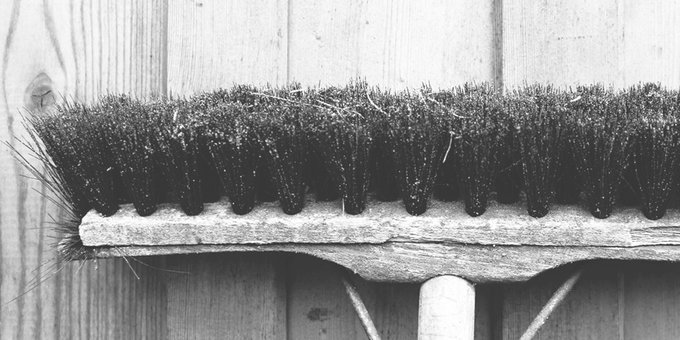 The Clean Sweep of Gospel Confession

There’s a story from my college days that I’ve been notorious for. It goes like this: One day at the mall, I noticed a guy walking beside me, wearing a Michigan sweatshirt. Since I’m from Michigan and went to school in Virginia, I always enjoyed meeting people from my home state. So I said, “Are you from Michigan?”

“Really? Me, too!” I said with enough enthusiasm to make up for his lack. “Which part of Michigan?”

Suddenly, it dawned on me that I was not in Virginia, connecting with a fellow Michigander. It was Christmas break, and I was home. I was in Grand Rapids.

Quickly, I turned and walked the other direction, leaving Mr. Michigan sweatshirt no doubt muttering, “The things a girl will do to strike up a conversation.”

It was a great story. Everyone loved it. Wherever I went, people would say, “Have you guys ever heard Shannon’s Michigan sweatshirt story? You’ve got to hear it.” And I would tell it again. There was just one problem: The story wasn’t true. It never happened.

It almost happened. I really was in the mall, walking next to a guy wearing a Michigan sweatshirt. And I did momentarily forget that I was in Michigan. And I did almost ask, “Are you from Michigan?” But I caught myself and chuckled over how funny it would have been if I had actually asked that.

That night, when I was with a group of friends, I told the story as if it had happened. It was funnier that way. And so the lie began.

I don’t recall when I started regretting the story, but I do remember cringing when someone told it at our wedding. And I remember feeling sick when my new husband and I promised to never keep anything from each other. There were a number of occasions when I laid awake, feeling so guilty after having told the story to yet another group of friends. I even tried to convince myself that it was true. It could have been true. It felt true! But of course, it wasn’t.

It certainly wasn’t the only lie I’ve ever told or the only story I’ve embellished (especially as a child!). But because I had lied so publicly and so repeatedly, I felt a deep sense of shame. It was my secret, and I hated it.

Last summer on our way to church, my husband and I were talking to our kids about integrity. Someone had stretched the truth, and there were consequences. Trying to stress the gravity, I said, “Kids, lying is a difficult habit to break. If you tell a lie, the best thing to do is confess it right away and be free of it.” As I said this, God brought the familiar pang of conviction about my sweatshirt story. But this time, I decided to do what I was urging my children to do and come clean.

There in our van, I confessed my secret. My kids had grown up hearing the story, but I now revealed the truth. I spoke the confession that had been corked up in my heart for so long and let the tears spill.

Afterward, my husband reached over to squeeze my hand. There was compassion in his voice when he said, “It’s okay, honey. You didn’t have to worry about telling me. I forgive you.” Then he led our kids in prayer, thanking God for my confession and asking Him to help us all to tell the truth—especially after we’ve first told a lie.

In retrospect, I notice three lessons about sin tucked into my experience with the sweatshirt story.

I never intended for the story to go as far and wide as it did. I thought I would share some humor with a few friends and move on with no consequences. But that little story grew into something ugly that followed me for twenty-five years. It was a sin I didn’t want to continue participating in, but I felt trapped. And what was holding me hostage? Shame.

After confessing my sin of lying, I realized how silly it was that I had never done so before. I had been ashamed of what people would think or say if I told the truth. Yes, lying—like all sin—is serious and wrong. And yes, embellishing can quickly turn into counterfeiting, fraud, or perjury, so it’s best to take our sin very seriously. But shame doesn’t help us rid ourselves of sin. Instead, shame inflates sin—making it bigger and bigger in our minds. The only thing that can puncture our shame and set us free is the needle of confession.

I was surprised by how freeing it was to confess my sin to my family that day in the car. Why had I held on to my façade for so long? It makes no sense, really. By claiming to be a Christian, I’ve already exposed myself. I’ve let the world know that my heart was so wicked it took the slaughter of Jesus to clear my guilt. In his book Tempted and Tried, Russell Moore puts it this way: “I am crucified with Christ. My corpse is hanging in the sun, publicly marking me as a sinner, worthy of death. Why then, would I try to cover the fact that I’m a sinner?” (p. 174).

Shame bullies me into hiding my sin, but Jesus invites me to swing wide the door of confession and let the light of the gospel in to sweep my heart clean of sin. When I confess my sin, I am simply restating what I’ve already said is true: I am a sinner, saved by grace.

Friend, don’t be entrapped by some long-standing habit or past sin. Don’t let shame hold you hostage. Galatians 5:1 says, “For freedom Christ has set us free.” Won’t you let the light of the gospel sweep your heart clean today?

What sin have you kept covered? How can you puncture your shame by confessing your sin? To prepare your heart for confession, draw a picture of the cross, with your hidden sins written in big letters on it. Remind yourself that Jesus has already cleared you of guilt.

Previous Post Loose Lips Sink Families
Next Post Ask an Older Woman #5: How Can I Focus on Jesus in the Chaos?