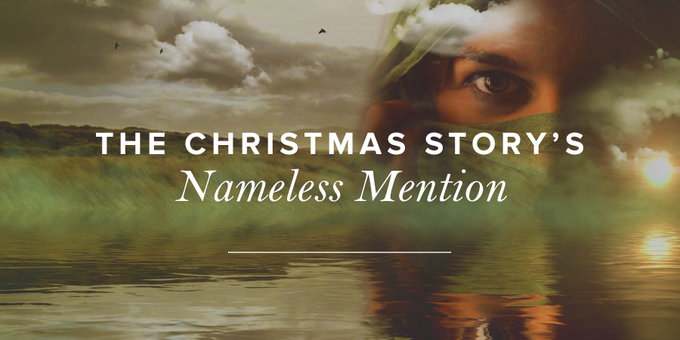 Hidden beneath the glittery tinsel on the tree and snowy sleigh rides adorning Christmas cards lies the reason for all of this celebration: redemption. Long forgotten stories are woven throughout the ancestry of the Christ child who came “to give light to those who sit in darkness and in the shadow of death, to guide our feet into the way of peace” (Luke 1:79). These real-life stories are reminders of the amazing work of redemption.

Matthew’s gospel opens with, “The book of the genealogy of Jesus Christ, the son of David, the son of Abraham” (1:1). Then he offers a lengthy list of names that lead to the Redeemer: “And Jacob the father of Joseph the husband of Mary, of whom Jesus was born, who is called Christ” (v. 16). These are the messy and broken lives that weave their way through history to present the Christmas narrative.

Today, I want to share with you just one of those stories. Within the forty-two generations listed, we find four women named, but there are actually five women included in this significant roll call of the Messianic family.

One woman is mentioned, but left unnamed.

Fourteen generations into the list, we see this woman’s nameless mention:

And David was the father of Solomon by the wife of Uriah (v. 8).

Only mentioned through her husband’s name, Bathsheba carries the mantle of the nameless woman in this list. One thousand years earlier, she was summoned to David’s bed and would carry his seed in her womb. That child would die, but in an amazing act of mysterious sovereign grace, God would bring redemption. The royal Messianic line would flow through her—it’s a wonder that is hard to comprehend.

The God who is holy, who cannot abide in sin’s presence—who sent His Son as a babe to be the sin sacrifice—willingly redeems sinful men and women and includes us in His family.

Her life was upended and torn apart by one man’s selfishness. She was in a vulnerable position as a woman; summoned by the powerful king of Israel, she had little recourse as his subject. Some have tried to place blame on Bathsheba, but I don’t. When the sinful union is described in Scripture, the adultery is always referred to as “David’s sin” or attributed in some way to him alone, such as “the thing that David had done displeased the LORD” (2 Sam. 11:27).

I’ve wondered whether David would’ve married Bathsheba if she hadn’t been carrying his child or what would have happened if Uriah had slept with her when David called him in from battle. I imagine she wondered the same thing. I wonder if she battled with insecurities and shame because of David’s sinful choices. I’ve wondered how she grappled with so much significant loss in her life.

“Nevertheless, because by this deed you have utterly scorned the LORD, the child who is born to you shall die” (2 Sam. 12:14).

Bathsheba first walked through the grief and shame of adultery—an affair she did not choose, but one that seems to have been forced on her. She walked through the loss of her husband, Uriah, followed by the death of her son. She is the “nameless mention,” as Scripture continues to call her the “wife of Uriah” long after his death. I wonder if others called her that as well. I wonder what whispering and shame she endured.

Why Was Bathsheba Nameless?

As the “nameless mention,” she points us to God’s power to redeem. I don’t think she bears this mantle because of personal guilt, but it reminds us of God’s mercy, grace, and power to redeem the most horrendous of crimes.

Bathsheba’s tragic life was not what she would’ve scripted, but that isn’t the end of the story.

God demonstrated grace toward David and Bathsheba by giving them another son, Solomon, and at his birth, God expressed His love for this child:

Then David comforted his wife, Bathsheba, and went in to her and lay with her, and she bore a son, and he called his name Solomon. And the LORD loved him and sent a message by Nathan the prophet. So he called his name Jedidiah, because of the LORD (2 Sam. 12:24–25).

Jedidiah means “beloved of the LORD.” This little one was beloved of the Lord. Bathsheba had her own pet name for him, Lemuel, which means “dedicated to God.”

David gave his son the name “Solomon” derived from the Hebrew word for peace. Was David hoping for Solomon to be the peace offering in their marriage? Perhaps his peace offering to God? Or was Solomon a sign that God would lead them in the “way of peace”?

And what of Bathsheba?

Did she ever reach that “way of peace” that Luke’s gospel describes?

I believe we find the answer in Bathsheba’s counsel to her son as she prepared him to reign as king over Israel. Scholars differ on what mother is speaking in the final chapter of Proverbs, but for the greater part of history it has been understood that this is Solomon’s record of lessons he received from his beloved mother, Bathsheba. If this indeed is another “nameless mention” of her, we get an encouraging glimpse of “the rest of the story.”

Although her youth was marked by tragedy, losses, and grief, Bathsheba reached that shelter of peace that is only found through acceptance of God’s work. She realized that God is a redeeming God, and because of that, she can step into the future with confidence in the story He is writing.

Bathsheba’s message to her son is still instructive to us today:

Strength and dignity are her clothing, and she laughs at the time to come (Prov. 31:25).

Bathsheba had settled the deepest issues of life. Surely she grappled with questions of God’s sovereignty, with confusion over His goodness and His plans for her. But at some point, she must’ve reached that meeting place with Him where she saw God’s glory, where she understood that God is God and all He does is right. The beginning place of that realization is standing in awe of who He is.

The “nameless” Bathsheba sums it up well:

Charm is deceitful, and beauty is vain, but a woman who fears the LORD is to be praised (Prov. 31:30).

That lesson passed on to her son echoes in these words from him:

The fear of the LORD is the beginning of wisdom, and the knowledge of the Holy One is insight (Prov. 9:10).

The God Who Redefines Your Mess

God wasn’t predictable with whom He chose to place in His family tree. But He is predictable in how He works: His character is faithfulness, and His activity is redemption. God remembered Bathsheba in her brokenness and painful condition and gave her the son who was “beloved of God.” He brought Bathsheba close into His royal family, and she became a noble mother in the line of the coming Messiah.

You may feel your past defines you. Maybe your family tree is a bit messy or your past life is something you’re ashamed to share. God desires to meet you where you are and do a beautiful work that points others to His redeeming character.

The God of redemption is a God who delights in stepping into our messy lives and cruel disappointments, to bring about the most unexpected and glorious transformation! And that is at the heart of the Advent season.

Jesus came because of our mess, and oh, what a glorious redemption He brings! This is the heart of the Christmas story. This is what lies beneath the glitter and glitz.