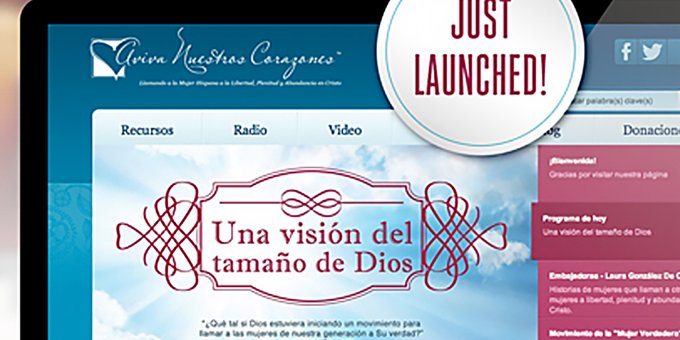 Have you heard? The Spanish version of Revive Our Hearts officially launches today!

Our Spanish friends have worked tirelessly for months to prepare for today. There’s not time to introduce you to the dozens of volunteers who have helped along the way, but I’d like to at least let you meet the ten staff members.

What has the Lord taught you in the process of launching ANC?

Laura Gonzalez de Chávez, Director:
The Lord has taught me that this is His work, and His purposes will be accomplished. He has shown me that He is our Supreme Director; we just need to be willing, available instruments.

Isabel Andrickson, General Editor & Attorney working on establishing ANC as a legal entity in the Dominican Republic:
The process has been an answer to my prayers for a servant’s heart. I have had to focus on others instead of myself. I’ve also understood that serving the Lord is not a romantic issue but a real issue. It requires time, effort, and dedication. He has taught me to be patient through the waiting time of some legal procedures, convicting me that He is in control and “ANC’s time is in His Hands.”

Phil Krause, Production Coordinator:
I’ve seen the value of true teamwork, where each person’s role is vital to reaching the goal. I’ve also sensed a greater dependence on God.

Why do you have such a passion to be involved with ANC?

Annemarie Sauter, Audio Pre-Production:
I see how God is using this ministry to draw people to Himself through the power of His Spirit, and I want to be part of the army that fights for His Kingdom to come.

Elba de Reyes, Biblical Correspondent:
God has used Revive Our Hearts as an instrument to transform my life and mind according to His Word, impacting me with God’s design for me as a woman and with the abundant life I have in Him. ANC is the way to pass what I’ve received on to Hispanic women!

What is your number one prayer as ANC goes LIVE?

Mayra de Ortiz, Administrative Assistant/Fundraising:
My prayer is that many women are enlightened, and their lives are transformed as mine has been.

Ernesto Sierra, Production Assistant:
My prayer is that women can understand that submission is not humiliation, but an act of worship to God.

How can we pray for you specifically?

Patricia de Saladín, Co-Producer and Voice of Nancy Leigh DeMoss:
That God may keep us faithful till the end and that we may never lose the wonder.

Betsy de Gómez, Web Host/Graphic Design/Social Networking:
That God helps me grow in my relationship with Him and helps me keep my priorities straight in caring for my husband and children.

Carmen Espaillat de Morillo, Program Host and Voice of Leslie Basham:
My prayer is to be an instrument of honor in God’s hand for the salvation and spiritual growth of my family and beyond.

You can be an instrument in God’s hand, too, by letting your Spanish-speaking friends and relatives know about AvivaNuestrosCorazones.com.

And if you’d like to help cover the expenses involved in developing and launching this important ministry, give here, or call or write to us, designating your gift to Aviva Nuestros Corazones. The number is 866–842–8381 x2050, and the address is Revive Our Hearts, P.O. Box 2000, Niles, MI 49120.

In the meantime, would you write a short prayer or blessing below for this team and new outreach?