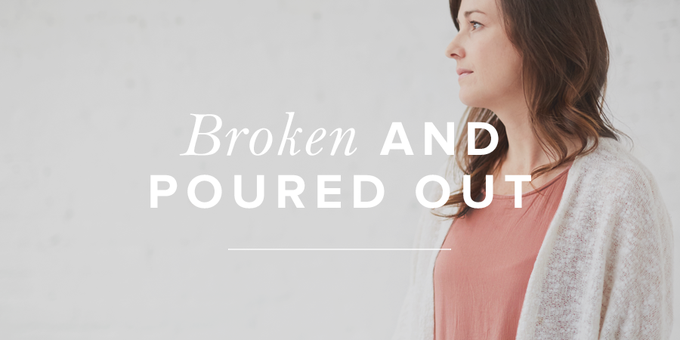 Broken and Poured Out

Seated around a beautifully decorated table, a woman tosses a verbal grenade. Across the table, her sister reacts with defensive outrage. Sparks fly. Chairs are pushed back. Individuals storm off. The celebration comes to a standstill.

Innately we know that celebrations should not be interrupted by feuds. Especially if the celebration is the last meal you’ll ever eat with the most important person in your life! Yet that’s exactly what happened during the Last Supper that Jesus shared with His disciples. A fight broke out.

This meal was deeply significant not just because they were celebrating the Passover but because Jesus was instituting a new meal of remembrance.

Historically, the Passover commemorated the night the angel passed over the homes that bore the lamb’s blood, then delivered the Lord’s people from slavery in Egypt. But from now on, believers would gather to remember this night instead—the night that Jesus, the sacrificial Lamb of God, died to deliver us from slavery to sin.

The disciples didn’t catch the full significance until afterward, but Jesus knew exactly what He was saying as He chose two objects to represent Himself.

First, He took a loaf of bread and tore it into pieces. This represented His body, which was about to be broken for them (Luke 22:19). Then He took a cup, which—poured out—represented His soon-to-be-shed blood (Luke 22:20).

Don’t let familiarity steal the impact of those images from you. Jesus asked us to remember Him as a torn piece of bread and an emptied cup. He was our sacrificial Lamb, torn for His people. He was our King who poured His life out to save us.

Surely the disciples ate the bread and drank the cup with grave somberness. But moments later, a fight broke out.

This seems completely ludicrous! Yet so very possible.

The disciples were fixated on the kingdom. They longed for God’s people to experience another “Red Sea” deliverance. They wanted their oppressors to be drowned out by God’s supernatural power. And they had seen this power in Jesus! They had such hope!

They had heard Jesus talk about suffering and cost, but I’m guessing they pictured valiant sword fights leading to crowns, thrones, and honor. Not blood dripping down a cross or oozing out from a crown of thorns as people sneered.

Now to be sure, Jesus anticipated the freedom of His people and His coming exaltation (Heb. 12:2; Phil. 2:8–9). And He was the One placing images in the disciples’ minds of sitting on thrones in the coming kingdom (Luke 22:29–30). But in Jesus’ kingdom, being broken and poured out is the way to greatness! Self-centeredness, self-focus, and self-promotion have no place there.

Even though Jesus had been teaching this for three years, saying, “If anyone would come after me, let him deny himself and take up his cross daily and follow me” (Luke 9:23), the disciples struggled to grasp the concept of selfless greatness. They were still driven to promote and protect themselves, not lay their lives down.

Ironically, it was Jesus’ mention of the most selfish man in the room that sparked the disciples self-focused argument about who was the greatest.

What a stark contrast between Jesus and Judas. In extreme selflessness, Jesus was preparing to lay His life down for His friends. In evil selfishness, Judas was preparing to make some cash by leading Jesus into a deathtrap.

When Jesus said, “Behold, the hand of him who betrays me is with me on the table” (Luke 22:21), the disciples immediately turned to each other with questions of who would do such a thing.

Their immediate outrage was entirely appropriate, since Jesus’ murder was the greatest atrocity ever committed.

But their outrage over the betrayer among them quickly converted to outrage at being questioned. Fingers pointed. Voices raised. Insulted disciples proclaimed, “I would never!” Then in an equally outrageous shift, they began to argue about which of them was the greatest. “I would never!” morphed into, “Remember, I’m the guy who . . .”

A dispute also rose among them, as to which of them was to be regarded as the greatest (Luke 22:24).

Defensiveness always reaches for proof. When we’re accused, we hold up what we’ve done right. When threatened, we resort to ego-gratification. Driven to defend and protect ourselves, we push back our chairs and storm off, saying, “I would never!”

But self-defense, self-protection, and self-promotion are not the ways of the kingdom. And Jesus’ time with His new kingdom officers was drawing to a close.

These men, soon to be tasked with worldwide expansion of the kingdom, have just learned about a mole among them. Yet rather than rallying in defense of Jesus, they start a brawl over who outranks who!

As I watch this scene unfold, I want Jesus to start barking out orders. I want Him to call, “Ten-hut,” and point His finger in these guys’ faces! Yet in striking patience and longsuffering kindness, Jesus uses these last moments not to rebuke but to teach.

He gently draws His self-righteous, infuriated, incensed disciples back to the way of the kingdom:

Jesus—the broken and poured out servant of all—was the epitome of kingdom greatness. He didn’t lord it over Judas or defend Himself. Instead, He got on His knees and washed Judas’ feet! He served His betrayer a meal! Like a child, He entrusted Himself to His Father.

Picture all the ways that you have been given more than others. What are the ways, if challenged, you might argue that you deserve some credit? Consider:

Think of your responses as your measurement of “greatness.” Even if you try not to focus on your greatness, you’re aware of the ways God has blessed you. Picture each drop of your greatness squeezed out and mingled together into one cup.

Now, picture that moment someone points a finger at you. How do you feel when you are examined or questioned? Is it not most intuitive to lift up the contents of this cup as proof that “you would never”? Do you not fly to display your “greatness” as evidence that you deserve not to be scrutinized but honored?

Self-defense, self-protection, and self-promotion are the most natural responses in the world. But they have no place in the kingdom.

Jesus—whose cup is filled with more greatness than could be contained in the oceans—lifts His cup and says, “This cup that is poured out for you is the new covenant in my blood” (Luke 22:20). Then He invites you to also take your cup of “greatness” and pour it out. Not in senseless waste but in sacrifice to God and in service to other people.

This is what true greatness looks like in the kingdom.

As an American Christian woman, I enjoy vast privileges and protection that women throughout the ages have not. And though I am deeply grateful for my freedom and opportunities, in some ways I think it’s harder to live as a “broken and poured out” Christian in “the land of the free.”

The world screams for me to stand up for myself, defend my rights, and strive for success. The idea of pouring out what others have fought for me to have seems almost disgraceful. When I speak (as I did here) of submission, laying down rights, brokenness, sacrifice, and repentance, people around me do not applaud. Instead, women gather to march against such ideas! They demand to be heard and grip their cups of greatness—along with their posters and megaphones—tightly between their fists.

As a disciple of Jesus, you, dear sister, are called to more than this. As a true woman, you are invited to rise above the angry roar and pursue true greatness. How is God inviting you to be broken and poured out in sacrifice to Him and in service to others? Is He calling you to:

Like the disciples, we need the gentle teaching of Jesus. We need to eat the bread, drink the cup, and remember the Lamb who was slain. We need to be broken and poured out. For this is the way to be great.

Previous Post God’s Grace in the Face of Lyme
Next Post Gospel Hope for Moms, Visiting the Lonely, and More

How to Make and Eat (Truly) Humble Pie