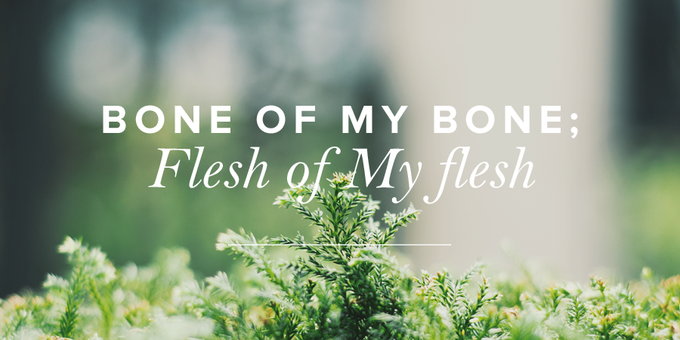 Bone of My Bone; Flesh of My Flesh

When I found Adam, he was standing below the tree, back pressed against the trunk, shoulders shaking under the leaves.

Bone of my bone. I watched his body retch. He was gasping for air, grabbing at his side, gripping the space from which I was taken—I had taken so much from him. Flesh of my flesh, he flung his body to the ground, wanting God to make all of this pass but no longer knowing if anything was possible. He pushed onto his knees, wincing as rocks cut into his skin, seeing for the first time the way that blood stains.

It wasn't supposed to be like this. I took a chance and made a small choice; I went for one little bite of something beautiful and savored it for every second it was on my tongue. Nothing bad was going to happen. My body, my chance to take charge; my world, who could it hurt? The benefits would be worth it: wiser, stronger, satisfied. In control. Competent. Beautiful. I would be enough.

Bone of my bone, he swallowed a slice, and we didn't taste death until the seeds reached our stomachs, and the fruit grew grief and fear and shame. Flesh of my flesh, he began to look for a remedy to repair the damage we had done before these garden walls came crashing in, before God saw what had happened, what we had eaten. I dreaded Him discovering what I had desired to become.

Living in the Brokenness

So Adam collected leaves one branch at a time. I looked for means to mend the brokenness, and I stitched us back together one piece at a time, trusting we would make it all better. But Adam kept his eyes on the work that was before him and would not look at me, my heart exposed. And I learned instead what it is to be lonely—to live on a full earth yet feel emptiness within, to hear the roar of silence.

The wind began to blow our way, and I wrapped our fig-cloth around my waist. We tried to blend into the bushes around us, burying ourselves in all that God had called good. We were doing what we believed was best. We hid from Him; we were afraid.

God called out to Adam. I could hear His footsteps coming closer. Adam covered my mouth before I could cry out, "Be merciful to us. Don't forget that we are dust."

The consequences came, and God drove us out. As it happened, I found Adam by the tree, stumbling over the roots knotted underneath his feet. He glanced down at the garments God had given us, the fur soft but the skin still warm where it had been stripped from the animal's flesh. Bone of my bone, Adam would never wear these clothes without hearing the sound the animal made as it was slaughtered, this creature Adam had cared for sacrificed before his eyes.

The blood is on our hands.

We were driven from the garden, where my words once whispered still echo in the trees:

Not Your will but mine.

God, what have I done?

When generations have come and gone, our roots stretched across the earth, the record books will trace the infection in our family tree to my man in the garden.

The world will wait for a second Adam.

When they find Him, He will be walking among creation in the wild stillness of Gethsemane, His soul distressed to the point of death. Lamb of God, He'll be led to the slaughter. Innocent. Beautiful. His blood will flow from nail-pierced hands.

He'll be driven from the garden, where His words once whispered still echo in the trees:

Not my will but Yours.

And mercy will be won.