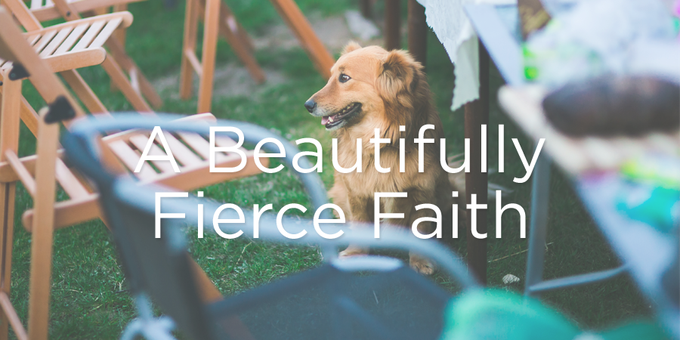 When I think of what it looks like to go for the heart of Jesus, I'm reminded of a woman who kept pressing in, even when life's tough challenges hit her in the face. Imagine going completely outside of your comfort zone to make an urgent request and then being referred to as a dog—not by enemies, but by Jesus!

This is one of those times in Scripture when Jesus really surprises me. I mean, He didn't respond like the normally tender, holding-a-child-in-His-lap-type of Jesus. No, this time He puts some huge roadblocks in this needy woman's path. (Kind of like He does with me sometimes.)

This woman had a real problem on her hands. Her daughter was demon possessed. There's no greater misery for a mother than watching her child suffer. Knowing she has no way to alleviate her daughter's pain, powerless before the torment and destruction, this mother looks beyond herself for help. She goes for the heart of Jesus.

This woman recognizes "the Warrior in our Midst" (Zeph. 3:17) and cries out to Him for help!

I love the fact that I can relate to this woman. She's in extreme need, and she's not a member of the religious elite—she's a Gentile. For religious Jews, a Gentile woman was the lowest on the significance scale. But the one thing she has going for her is she recognizes Jesus for who He is and trusts His heart.

We find her story recorded in Matthew 15:

And behold, a Canaanite woman from that region came out and was crying, "Have mercy on me, O Lord, Son of David; my daughter is severely oppressed by a demon." But he did not answer her a word. And his disciples came and begged him, saying, "Send her away, for she is crying out after us." He answered, "I was sent only to the lost sheep of the house of Israel" (vv. 22–24).

The Cry of a True Woman

Jesus ignores her at first, and the disciples try to get rid of her. When He does speak, it isn't the tender words she's heard from His lips when other people came for His help. Instead, it seems as though He puts up a wall of rejection. But none of this stops her. She is desperate in her need and relentless in her pursuit:

And he answered, "It is not right to take the children's bread and throw it to the dogs" (v. 26).

No matter how rough His words may sound to you, He was not being mean. Really. He was laying out a challenge for her to rise and meet. He doesn't use the word for dog that would refer to a common mongrel roaming the streets, but a dog that is a house pet. Although His response may seem cold or offensive, He was letting her stretch her level of trust and plunge in fully to demonstrate her faith by laying out some difficult obstacles:

She said, "Yes, Lord, yet even the dogs eat the crumbs that fall from their masters' table." Then Jesus answered her, "O woman, great is your faith! Be it done for you as you desire." And her daughter was healed instantly (vv. 27–28).

I love it! Jesus puts up walls of resistance, but she passes the test and He loves her reaction. No argument from her. Yes, an undeserving dog. She doesn't deny His humbling assessment, but she also doesn't run away to drown herself in a tearful pity-party. She presses in and appeals to His merciful character.

She looks beyond the slight, pushes past the rebuff, and goes for His heart.

This is the beauty of fierceness that I admire in women. This is a woman at her best. She's not using her strengths to take advantage of others. She's not using cruel manipulation tactics to get what she wants. She's not arrogant in her approach and demeanor, nor is she groveling in self-condemnation or self-pity. She's tackling the obstacles in her life with humility and determination. She's resourceful and creative. She's walking by faith, not by sight.

And Jesus loves her for it.

This is the kind of woman who grabs onto the hem of His garment and won't let go. She's beautifully fierce.

What are you asking Him to do today? Who are you interceding for?

How are you praying today?

Excerpted from Fierce Women: The Power of a Soft Warrior by Kimberly Wagner.

Previous Post Stuck in a Ditch You Drove Into?
Next Post Fanny Crosby: Her Story, Her Song