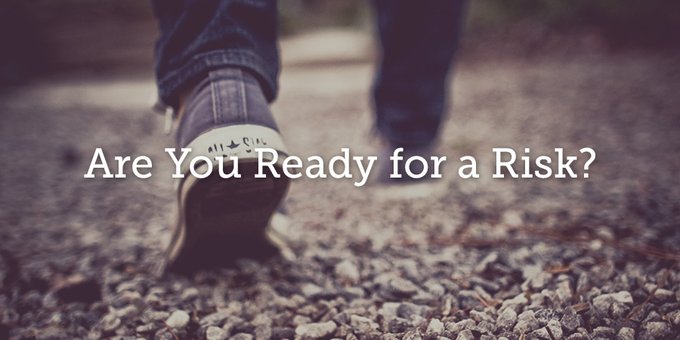 Are You Ready for a Risk?

One of my dreams is to move to the country with a big house and plenty of land for my kids to run around and trees for them to climb. Sometimes (thanks to HGTV), I like to dream about finding an old farmhouse and bringing it back to life.

But then reality comes crashing in. Undertaking a purchase and a renovation of that sort constitutes a risk—something I'm not very comfortable with. In fact, one day when I was perusing Pinterest and dreaming my farmhouse dreams, I realized how very, very uncomfortable I am with risk, so much so I avoid it.

That's not completely a bad thing, as taking a risk for risk's sake isn't very smart. I certainly don't want my kids to do that. Like I'd be thrilled if my son stopped jumping off high places (think two broken arms in less than six months!). But on the other hand, as the saying goes, with great risk comes great reward. And if I never take a risk, what am I missing out on? And more importantly, am I missing out on something God wants me to do?

So I decided to step out in the risk department and try to expand my horizons, so to speak. For one month, I chose to be more deliberate about taking risks, both in small and big areas, asking God to take me out of my comfort zone. And for inspiration, I looked to the story of a famous risk-taker, Queen Esther.

Esther didn't go around seeking out risk. The Bible doesn't say for sure, but I have to think she didn't have much of a choice to be part of King Ahasuerus' beauty contest. And going before the king on behalf of her people? Not her idea either. Mordecai asked her to do it. And when she tried to beg off (because she knew approaching her angry and volatile husband without an invitation could mean her death), Mordecai uttered these famous words:

"Do not think to yourself that in the king's palace you will escape any more than all the other Jews. For if you keep silent at this time, relief and deliverance will rise for the Jews from another place, but you and your father's house will perish. And who knows whether you have not come to the kingdom for such a time as this?" (Est. 4:13–14).

Esther's response? She chose to submit to Mordecai's authority in her life, and most importantly, she chose to obey God, no matter what the outcome: "If I perish, I perish." She may not have known what would happen, but Esther trusted the One who had called her to this task.

Something else I noticed about Esther? She didn't rush headlong into her risk. She took the time to prepare her heart and seek God by fasting and praying—and she called others to come alongside her to do the same. She sought out the wisdom of her heavenly Father, and then she was patient in carrying out the plan.

Am I willing to step outside my comfortable little life into whatever risk God is calling me to?

Nancy Leigh DeMoss says that the story of Esther is basically about a woman who says, "Yes, Lord." Esther says, "I'm willing to leave the comfort, the security, the convenience of my position as the queen, and I'm willing to do something about what's going on among the people of God, though it may cost me my life."

I've decided to stay away from renovating old farmhouses for now and just enjoy watching someone else go through the process on TV. But I do want my heart to be open to the risks God wants me to take—which when you think about it, trusting and obeying Him really isn't a risk at all.

What risks have you taken for God? How did they turn out?