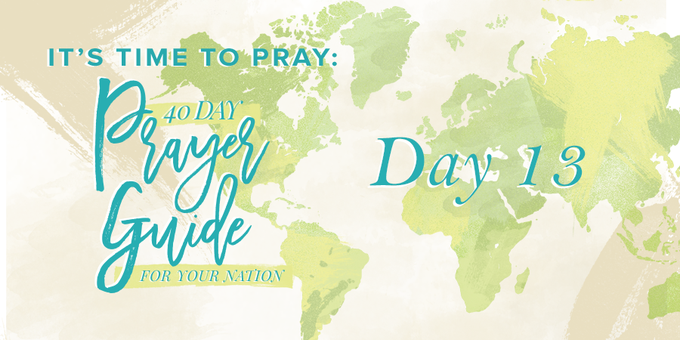 "When you go into battle in your own land against an enemy who is oppressing you, sound a blast on the trumpets. Then you will be remembered by the Lord your God and rescued from your enemies." ~Numbers 10:9

The shock of September 11, 2001 was magnified by the fact that as a nation, we have not been attacked in our land for a very long time. At the time of the attack on Pearl Harbor, Hawaii was not yet a state. For an actual invasion, we have to go back to the War of 1812. Of course, there was the Civil War, fought within our land, but by our own people. We are historically not used to living on a battlefield.

Today's Scripture speaks of fighting battles within our own land. Though written to Israel, there is certainly a spiritual principle for us today. And we need to hear it because we are indeed in a war in our own land. It is not melodramatic at all to declare that there is a war in the spirit realm for the soul of America. Years ago, someone once reportedly said, "America has the soul of a church." Is that how you would describe the soul of America today?

Scripture always portrays Satan as attempting to maneuver nations against the kingdom of God, and he is often successful. For many years, the godly foundation and prayers of the faithful kept our nation at least somewhat close to the purposes of God. This spiritual war, though, has intensified through the years, and we certainly find ourselves in a battle in our own land against an enemy who desires to oppress us.

The command of God is to sound a blast on the trumpets. Trumpet blasts typically called the Lord's people together for battle. But the blowing of trumpets (shofars) was also a call to prayer. In our day, I believe the two are merged into one. The trumpet is being blown to fight this battle on our knees. Our enemy is not flesh and blood, and we do not wage war with carnal weapons. This trumpet call is to intense prayer that glorifies Jesus, resists the devil, and releases the power of God. Then we can have every expectation of the promise of God to be remembered and rescued.

Father, forgive me for not always being aware of the war that is going on in our nation. Awaken me and all of Your people to the reality of what the Enemy is doing to destroy our foundations. Teach us to pray as You taught us to pray, so that we would be delivered from the Evil One. Help us, Lord, to heed the call of the trumpet to pray as never before. Show us the extent of the battles and help us not to wage war in the flesh but in the Spirit. Thank You, Lord, for Your promise to remember us and to rescue us!