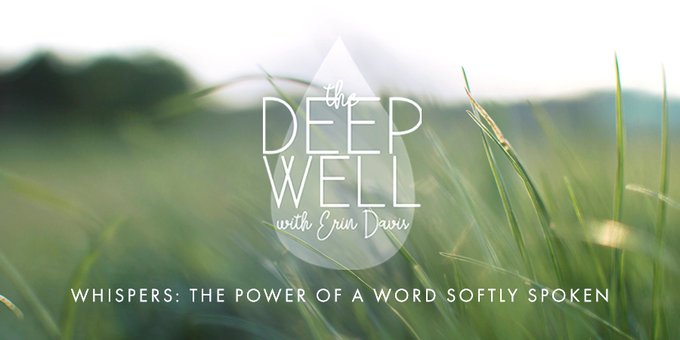 In a World of Loud, Be a Whisperer

Thirty years as a kindergarten teacher gave my mom a remarkable superpower: the whisper. I watched her subdue boys in the middle of an arm-flailing fit and girls in the center of a teary tornado over and over again by simply dropping to her knees and speaking softly.

“This is not the boy I know and love,” she’d coo. “Tell me what’s bothering you,” she’d whisper. And time after time arched backs and clenched fists became hugs. Pouts became smiles. With a softly spoken word or two she could turn the fiercest storm into a sunny day.

She modeled this habit for me with my own children. Once one of my boys was fit to be tied. No threat or bribe could cool his jets. I was already in frustrated mom mode, my temper ignited, I was going to show this little boy who the boss was. Super GiGi to the rescue! (My boys call my mom GiGi.)

She looked my little fella in the eye, pulled him close and whispered something softly in his widdle ear. The whining stopped. Where once an angry, out of control toddler stood, now there was just my sweet boy. Ready to let go of what was bothering him, he simply slipped his tiny hand into hers. I’ve never forgotten that lesson. For parenting and marriage, friendship and public discourse, my mom knew something most of us don’t seem to—often our most powerful words are the ones softly spoken.

I’ve long been fascinated by the women who whisper through Scripture. Zeresh and Claudia are a couple of my favorites. Don’t remember them? That’s no surprise. Their stamp on God’s great story is subtle, but important just the same.

We meet Zeresh in the book of Esther. She was the wife of Haaman, that no-good-master-manipulator who planned the annihilation of the Jews. If you read Esther 5:9–13 you’ll find Hamaan angry because Mordecai didn’t tremble before him. (Can you say ego?) He came home to his wife and friends all out of sorts, and Zeresh spoke words that would change the trajectory of her family forever.

His wife Zeresh and all his friends told him, “Have them build a gallows seventy-five feet tall. Ask the king in the morning to hang Mordecai on it. Then go to the banquet with the king and enjoy yourself.” The advice pleased Haman, so he had the gallows constructed. (v. 14)

Sure, Hamaan was worked up and petty, but freeze frame the story for a moment. He didn’t have a plan to do anything about it. He was venting. An unwise use of words for sure, but up until this point it wasn’t deadly for Hamaan or anyone else. But his wife used her power over her husband to fuel his pride, not to encourage him to embrace the humble, righteous life God calls each of us to. It didn’t turn out well for Hamaan or for Zeresh. (Be sure to read the rest of the story in Esther 7.)

We can easily buy into the idea that being a woman of influence requires us to make a lot of noise.

Zeresh fascinates me because I see in her story the unique and mysterious power of a woman’s words. We can easily buy into the idea that being a woman of influence requires us to make a lot of noise. But Zeresh was a woman of influence, though admittedly not the kind we want to be, with the words she whispered toward the ear of her already angry husband. How often have I used my influence to whisper unwise words into the ears of my husband, my children, my friends? Gulp!

Not all whispers lead others astray. Claudia stands as a stark contrast to Zeresh. That name doesn’t ring a bell? That’s because she’s not named in Scripture, but history records that Claudia was the wife of Pilate. As Jesus stood before Claudia’s husband, on trial and facing the death penalty, Claudia sent some soft words of her own. In the midst of the great drama of Jesus’ road to the cross, they’re easy to miss, but don’t:

While he was sitting on the judge’s bench, his wife sent word to him, “Have nothing to do with that righteous man, for today I’ve suffered terribly in a dream because of him.” (Matthew 27:19)

Who did Claudia think Jesus was? The Savior? Messiah? Coming King? We don’t know. But whatever it was, she felt dread and she sent word—just a few words, whispered into the ear of her powerful husband at one of the most important moments in human history.

Within hours of Claudia’s message, Christ’s blood would be poured out for us. With just a few words, Claudia used her influence to persuade her husband to wash his hands of our innocent Savior’s death (Matt. 27:24–26).

There are other whisperers in Scripture:

In each case, softly spoken words made a big impact.

In a Loud World, Be a Whisperer

We live in a world where everyone’s volume seems to be at max, and the noise of life is deafening. We’re bombarded with messages that say . . .

There are so many women who seek to gain control over others by being loud. (Often, me included.) By demanding . . . by parading . . . by yelling . . . But the women who have had the most influence in my own life have taken a much softer approach. They aren’t voiceless, but they are, as 1 Peter 3:4 describes,

Don’t let your beauty consist of outward things like elaborate hairstyles and wearing gold jewelry or fine clothes, but rather what is inside the heart—the imperishable quality of a gentle and quiet spirit, which is of great worth in God’s sight. (emphasis added)

In a world gone loud, God has given gracious women a superpower: the whisper. How can you use your soft words to speak volumes today?

PS: I’ve recorded a whole season of The Deep Well podcast called “Whispers: the Power of a Word Softly Spoken.”All six episodes (plus a bonus!) are available today. Find it at ReviveOurHearts.com/TheDeepWell.