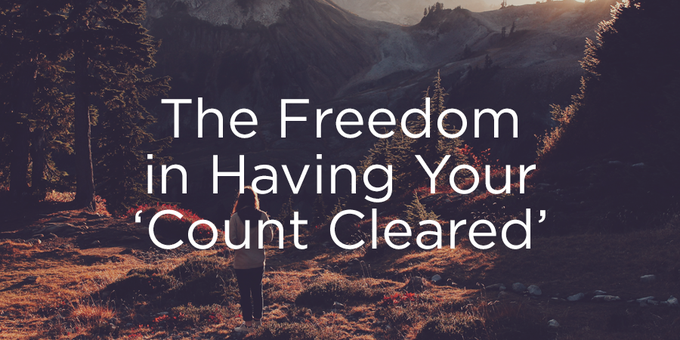 The Freedom in Having Your 'Count Cleared'

"Count cleared!" That's a phrase I hear several times during my day as a chaplain in a women's prison. At different times throughout the day and night, all movement stops as the guards count the prisoners to make sure everyone is accounted for, until the number is verified or "cleared."

"Count cleared" has held different meaning for me through the years. The first time I heard it as a prisoner, I was so scared. Even though it meant I was free to move, I was frozen on my bed wondering how I was going to adjust to prison life for the next eleven years. I resented the fact that I physically had to be counted ten-plus times a day, that for during that thirty minutes to an hour, I was even more confined than normal. But just as much as I had come to hate the process of being counted, I eventually fell in love with the words, "Count cleared!"

As I experienced the love, mercy, grace, and forgiveness of God, "count cleared" began to mean something different. I had racked up quite an account of sin in my life. As God began to draw me by His grace and reveal to me my sins, and as I began to hear the gospel, count time once again had become grievous to me—grievous because of the weight of my sin and the unveiling of my wicked heart. Oh what relief, what joy to learn that Jesus had become sin for me! That He had paid my debt with His very life. That He became the sacrifice for my sins and then sat down at the right hand of God and wiped the memory of them from His mind. I repented, I confessed, I believed, and He forgave. He cleared count!

Now the meaning of these words have changed for me once again. Over a year ago, war erupted in my life. The enemy came in like a flood. He stole, he killed, and he destroyed. Overnight I lost everything—my home, my job, my church, my church family, my leaders, and my best friend. I along with others had been betrayed. My spiritual leaders, my pastor, and my friends had done the unthinkable—adultery, manipulation, lies, lies, and more lies had been exposed.

I kept count of each arrow that pierced my heart. As I brought them before the Lord, waving them at Him frantically, I asked, "Lord, are You going to do something?" After I calmed down, the sweetest yet most challenging word echoed in my heart. Forgive. But how?

The same way He forgave me, I had to choose to forgive. It was as though He was saying, "Jennifer, it is time for you to clear count." There have been many days and weeks this past year when I have had to say, "Count cleared," several times a day, because the enemy keeps shooting his fiery darts. You see, the enemy wants us to keep score of how others have wronged us, but God says forgive. "Forgive because I have forgiven you." Count cleared.

Just a few days ago, I saw a picture of my friend, and lots of emotions came to the surface—jealousy, hurt, and disappointment, to name a few. I was disappointed that she looked good in this picture and not old and weighed down by her sin. I even jokingly slandered her with a marketing line for the face-care product she now sells: "It works great—even covers your sin." Immediately I knew I had grieved the Holy Spirit. It was as if He gently spoke these words in my heart: "Jennifer, the bucket can only draw out what's in the well. It is time for you to clear count again."

I'm so thankful that when I confess my sins, He is faithful and just to forgive and cleanse me from them. Count cleared. I want to live like that!

Are you keeping count in your life, or are you clearing it?

Forgiving Is the Hardest Thing You Will Ever Do