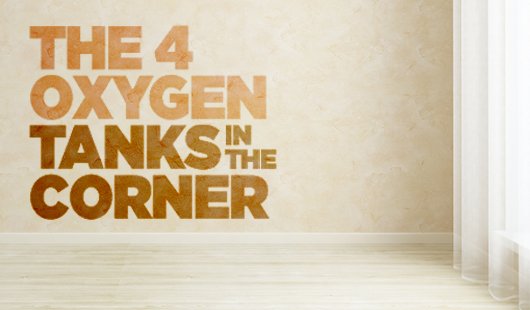 While driving from Michigan to Chicago, I passed a boxy-looking white truck that said, "Medical Oxygen" on its side. It brought back a rush of feelings of the day Hospice knocked on our front door with an oxygen supply for Nate.

When God allows life's toughest stuff to dominate us for a while, He doesn't leave us stumbling weakly without direction or purpose.

Jack barked with vigor that day, not wanting any harm to cross our threshold. Cancer had arrived silently, colorlessly, terminally, and he was on guard. I felt the same way: "Don't open the door! No more strangers parading through! No more medical equipment dominating the environment! No more reminders of our life-and-death battle!"

But of course, Van's Medical Supply had only come to help. I shushed Jack and nudged him aside, allowing the oxygen tanks to roll in—one, two, three, four.

The delivery man kept up a steady stream of conversation as he went in and out, a kind attempt to soothe our frayed nerves. He assured us the equipment would be easy to use while my brain screamed, "You mean Nate isn't going to be able to breathe?!"

The tanks were wheeled past Nate, and the man greeted our patient cheerfully, like a friend. I can't imagine what was in Nate's head as he contemplated needing breathing assistance, but he didn't let the stress show.

"Where should I put these?" the delivery man asked. We settled on a tight corner behind Nate's hospital bed. I can still hear the cold clanking of the four green tanks as he clustered them efficiently in the small, already-crowded room. My heart hurt that day contemplating Nate's next slip downward.

Today the oxygen tanks are gone, as is the hospital bed and every other reminder of Nate's killer illness. Nate is gone, too, but as I drove down the highway feeling sad, God reminded me that because Nate is gone, so is his need for breathing support. The cancer is gone, too, along with severe pain and approaching death. Our dark night did end, slowly for me and dramatically for Nate.

When we trust Him to equip us for what will be needed, He causes us to breathe easier, despite being surrounded by calamity.

Today I'm steadily moving forward, edging away from those agonizing days, not with reluctance anymore but with future-focus. Although a hopeful future was always there, in the darkness we just couldn't see it.

When God allows life's toughest stuff to dominate us for a while, He doesn't leave us stumbling weakly without direction or purpose. Instead, He equips us daily, much like Van's Medical Supply equipped us with oxygen before Nate needed it. When the need arose, we were ready, thankful for the four green tanks in the corner.

In a way, that's what God wants to be for all of us in every crisis. When we trust Him to equip us for what will be needed, He causes us to breathe easier, despite being surrounded by calamity.

How is God giving you grace to take the next breath in that difficult circumstance?