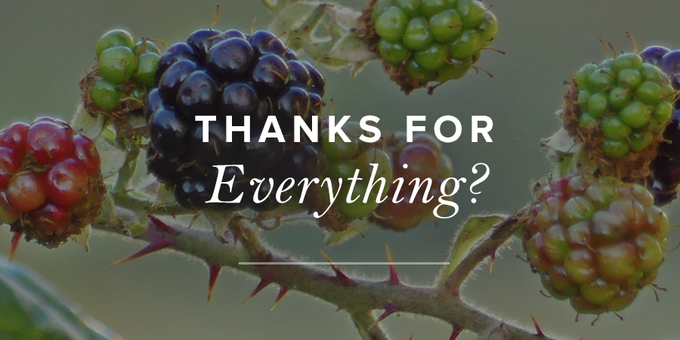 For a third grade assignment, my son defined thankfulness this way: "It's when you don't really like something, like your dinner, and your dad says that you should be thankful for it."

I’m sure he was picturing himself taking huge swigs of water to help the stuffed peppers (his least favorite dinner) go down. Oh to be a third grader, whose best example of something distasteful is stuffed peppers!

As adults we’ve got much bigger things to swallow:

In response to these things, I’m more tempted to gag and sputter, than blurt out, “Thank You, Lord!” But a friend recently said to me, “I know God says to be thankful in all circumstances (1 Thess. 5:18). But am I really to be thankful for all things? For painful, rotten, horrible things?”

When she put it that way, I had to wonder. Why would God want us to be thankful for things that are so contrary to His character? But I couldn’t find any wiggle room in Paul’s exhortation to give thanks to God “always and for everything” (Eph. 5:20, emphasis added).

Paul wasn’t simply being naïve. Just a few verses prior, he said “the days are evil” (Eph. 5:16). And Paul knew firsthand what evil looked like. Wherever he went, there were people trying to kill him! Yet Paul is the guy saying we should be thankful for everything.

I don’t think Paul was suggesting we dance at funerals or host cancer celebrations. He, himself, begged God to remove his “thorn of the flesh.” But when God refused, Paul said he was thankful. Why? Because his tormenting thorn kept him from becoming conceited (2 Cor. 12:7).

I have to admit that my thorns accomplish the same thing Paul’s did. There’s nothing like a good thorn to puncture my ever-inflating self-sufficiency and remind me just how dependent on God I am. Maybe if you look back over your shoulder you can see how God used painful things to turn your attention to Him, too.

None of us would choose pain or suffering. When a thorn tears into us, we instantly recoil. When it lodges in our lives and creates a festering wound, we do whatever we can to remove it. The thing demands constant attention and strips ordinary life of all pleasure. We turn to God, begging Him to take it from us. But sometimes He doesn’t.

I remember telling a friend about the dreadful situation that my other friends, Matt and Jane, had just endured. Early in pregnancy, they had learned that their baby had a chromosomal disorder and would not live, yet Jane would likely carry the baby full term. Each day Matt spent his lunch hour at a nearby chapel on his knees, begging God to heal their baby and deliver them from this pain. But Matt and Jane’s baby only lived five minutes after he was born, then went to be with Jesus.

My friend, after hearing about the agony Matt and Jane had endured, surprised me by saying, “Yes, that’s terrible. But just think what God can do over nine months of lunch hours spent in prayer!” I couldn’t deny that God had been faithful to my friends and that the struggle had caused them to turn to God like never before.

Psalm 107:22 says, “Offer sacrifices of thanksgiving” and Psalm 116:17 speaks of a “sacrifice of thanksgiving.” When I read these verses, they don’t conjure up for me images of meat sizzling on an altar. But I’ll bet that’s what the nation of Israel pictured as they sang these songs. Perhaps they could almost smell that sweet aroma of the fat portion of meat (per the instructions in Leviticus 7) that signified to God their thanksgiving.

We obviously no longer sacrifice bulls and lambs to deal with our sin and give thanks to God. Jesus was our once-for-all sin offering, laid on the altar by God. But out of gratitude for all God has done, there is one sacrifice we’re told to keep offering: the sacrifice of praise.

Fruit, as you know, takes a while to grow. So this sacrifice of acknowledging God isn’t a quick afterthought—like an arrogant, self-centered athlete jabbing a finger toward heaven after scoring. No, this sort of fruit is cultivated over a whole season of saying day after day, perhaps lunch hour after lunch hour, “I am not strong; I am weak . . . so weak. I need You, Lord.”

We each begin life saying, “I need nothing. I deserve everything.” But God wants to transform us into people who say, “I need You, Jesus. I surrender to You.” So He uses thorns—the kind that create physical pain and the sort that create emotional and spiritual turmoil as well. These thorns draw us into a correct posture before God—on our knees.

So in the end my third grader was right. Thankfulness is appreciating even the things in life that you’d rather not have on your plate. Should we thank God for all things—including thorns? I’ll leave you to decide. But first consider: What would you be like if your life was thorn-free? Would your lips be acknowledging God or yourself?

What thorns are tearing into your life and creating soreness or wounds? Spend some time today letting your thorn pull you to your knees before God. What does He want you to acknowledge about Him? How can you spend your season of pain cultivating a heart that says, “I need You, Lord”?

Previous Post Giving Thanks for Every Name of God
Next Post Do We Give Food Too Much Glory?

The Thorn of Depression . . . and Grace