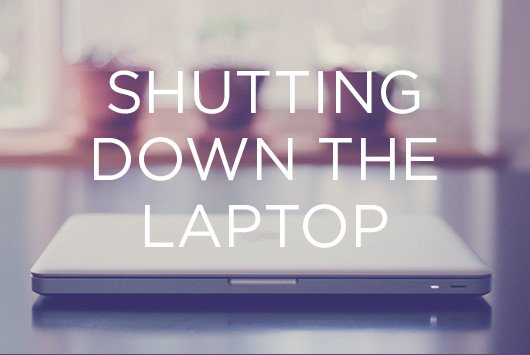 Shutting Down the Laptop

Some days I want to turn off my laptop, snap the lid shut, and never open it again.

I want to shut myself off from the cyber world because I don't want to see depravity's destruction so up-close and personal. I want to put the lid on the stuff that keeps making my eyes well up with tears.

Sometimes I literally feel sick when I read about another child molestation, another suicide bomber, another mall shooting or kidnapping; when I read that we've had more than 55 MILLION babies slaughtered through abortion.

I want to shut myself off from the cyber world because I don't want to see depravity's destruction so up-close and personal. I want to put the lid on the stuff that keeps making my eyes well up with tears.

When I come across an article about the number of people (men, women, students) who are deeply addicted to pornography, when I see another ad flit across the screen with a woman baring her body, when I read another attack on God's sacred view of marriage, or the latest report on sex-trafficking, and the sight of Christians being slaughtered just because they're Christians, I want to weep.

I want to find a comfortable place to hide because I don't want the pain of seeing the brokenness.

But even if I close my laptop, I won't be insulated from culture's depravity.

I regularly hear of or see first-hand the devastating effects of drug addiction, sexual immorality, children left homeless, husbands divorcing wives, and wives sleeping around. Often, I leave a counseling session with tears streaming down my face because of sin's consequences and how I've seen the destroyer devour another family.

So it's not just my laptop I would need to close, it's my eyes and heart.

I would have to become a hermit. But hiding won't help matters. In fact, if I hide, aren't I contributing to the problem?

What does God say about closing my eyes to the depravity?

If you say, "Behold, we did not know this," does not he who weighs the heart perceive it? Does not he who keeps watch over your soul know it, and will he not repay man according to his work? (Pro. 24:11–12)

But how can I be involved in God's rescue operation if I'm hiding in the storm shelter?

And what was it that Jesus said about hiding? (I seem to remember a little song about hiding my little light under a bushel . . .)

You are the light of the world. A city set on a hill cannot be hidden; nor does anyone light a lamp and put it under a basket, but on the lampstand, and it gives light to all who are in the house. "Let your light shine before men in such a way that they may see your good works, and glorify your Father who is in heaven. (Matt. 5:14–16)

I think putting my lamp "under a basket" (or my "light under a bushel") might be similar to hiding in the safety and comfort of my blissful blindness. If I close my laptop, or close my eyes and heart to the needs of a sinful world, I'm not only protecting myself from the pain that comes through exposure to sin, but I'm also preventing others from being exposed to the light of the gospel at work in my life.

As much as I hate to be aware of it, in order to rescue the perishing, I have to actually wade into the muck of this culture ( I don't mean that I need to "indulge in it") and seek to rescue those who are drowning.

I can't hold out the light of the gospel, if I'm hiding my lamp under a "bushel" of comfort and ignorance. And if I do choose to hide in comfort, I'm still not exempt from evil.

I still have my own heart to deal with.

How are you engaging the culture today and reaching out to those who are perishing?

Previous Post What Is the Goal of Motherhood?
Next Post 6 Ways Parenting a Difficult Child Can Strengthen Your Marriage