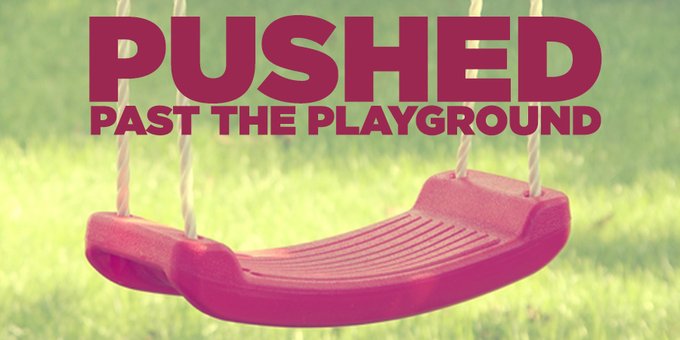 Pushed Past the Playground

One day when my daughter was one-and-a-half, I took her for a walk around our neighborhood. The first thing we passed on our route was an elementary school playground where we would sometimes stop and play. Today, though, I had other plans. I wanted to show her some of the flowers that had bloomed—then we would go to the playground on our way home.

However, as soon as she realized we were not going to the playground immediately, she broke down. Her tears and screams continued no matter how I tried to explain we were doing something better. I had a plan, but she couldn't see past what she wanted to do. She didn't trust that my plan just might be better.

Shortly after that walk, I was told it would be dangerous for me to have more children due to a heart condition. I tried to convince myself it was okay. I thought of the friends and family members who had not been able to have children at all and reminded myself how blessed I was to have my daughter.

I just told Him how I felt (He knew it anyway, so there was no sense in trying to hide it). My anguish was real and intense, and I felt the death of a dream.

But one day as my daughter napped in her room, I broke down. I knelt by the couch and cried out to God in anger and grief. I was being pushed past the playground, and I didn't want to go any farther. So I just told Him how I felt (He knew it anyway, so there was no sense in trying to hide it). My anguish was real and intense, and I felt the death of a dream.

The next few months were a sweet time of fellowship. I was on that walk, and my Father was teaching me, loving me, and communing with me. I had not forgotten my desire for more children, but I realized the deeper joy of abiding in Christ. My Father was lavishing upon me His love and grace in rich times of prayer and studying His Word. He was showing me that sometimes the walk is better than the playground. He was teaching me that His ways are better than mine.

My Trip Back to the Playground

As it turns out, the doctors did end up giving me the go-ahead to have another baby. Micah (whose name means "Who is like God?") was born the following summer. My heart was further weakened during the birth, and I underwent a successful procedure to repair the problem several months later.

So now when I look at my son, I'm reminded—Who is like God? He graciously showed me:

And then, completely unexpectedly, He took me back to the playground. He didn't have to. He would have been good and gracious without doing so. But He did, and for that and countless other things, I will praise Him.

Your righteousness, O God, reaches the high heavens. You who have done great things, O God, who is like you? (Ps. 71:19)

Have you ever experienced the death of a dream? How did God work in your heart through those circumstances?

Previous Post Self-Harm: 5 Ways to Respond with Love and Truth
Next Post Is There Hope for My Marriage?