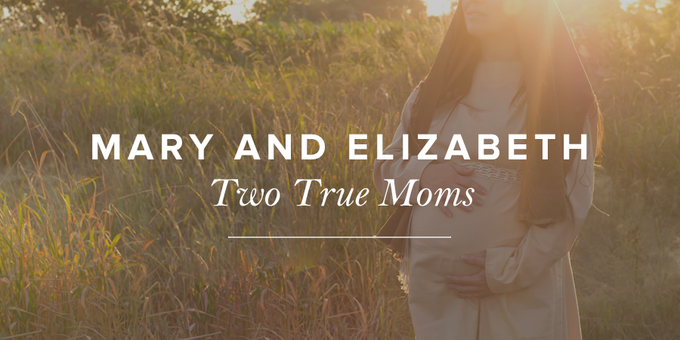 Christmas is a time of busyness for most of us—a time to shop for special presents, make delicious food, and decorate our homes, all as we celebrate the birth of Christ. But amidst the busyness, I also want to pause and reflect more deeply upon the Christmas story. And this year God has brought to mind two women who played a major role—two women who I think are true examples of biblical womanhood. Their names are Mary and Elizabeth.

You've probably thought about their stories before, just as I have. But I think it's valuable to look at their examples even if we have studied them time and time again.

I can't imagine sitting at home, probably doing your everyday work and dreaming about your upcoming marriage, and then having an angel of the Lord suddenly appear. I'm not sure what my reaction would be, but I don't think it would have been the same as Mary's. Luke 1:29 tells us that "Mary was greatly troubled by his [the angel's] words and wondered what kind of greeting this might be." Greatly troubled by his words? I think I would have been more shook up by his sudden appearance!

After Gabriel told her that she would give birth to the Son of God and explained how it would happen, Mary responded by surrendering her life to God's control: "I am the Lord's servant.... May it be to me as you have said" (Luke 1:38).

Mary didn't mention how inconvenient this unplanned pregnancy would be to her wedding plans. She didn't protest to Gabriel that as an unmarried pregnant woman, she could be stoned under Jewish law. She took what the angel told her, and she accepted it. She put herself at God's disposal.

Not my will, Mary basically said, but Yours be done.

Things couldn't have been easy for Mary. We get no indication from Scripture about her parents or their reactions to what was going on.

So what a blessing it was that Gabriel told Mary that her cousin Elizabeth was also going to have a baby in seemingly impossible circumstances. We see in Luke 1:39 that Mary hurried to go see Elizabeth. Who better to help Mary not only contemplate what God was doing in her life but also share in the joy and wonder of this child who was to be the Messiah of the world?

Elizabeth conceived John in her old age. Before this, she was barren. Imagine how difficult that would be in a culture where a barren woman was considered disgraced and cursed by God.

I'm sure Elizabeth felt alone. Alone with no children or grandchildren to care for. Alone in her community surrounded by other women who bore child after child, while her baby never came. How did Elizabeth respond to all of this? The Bible doesn't tell us. But we do see her response when she found out she was pregnant.

The Lord has done this for me. . . . In these days he has shown his favor and taken away my disgrace among the people (Luke 1:25).

Elizabeth chose to praise God. She could have dwelt on the past, that it had taken this long for God to give her a child. Or she could have chosen to think about what she might miss having a child this late in life—we don't know how long she lived after John was born.

Instead Elizabeth chose to praise God for the favor He had bestowed on her. She recognized this was His plan for her, and she rejoiced in it. And she understood that she had been blessed to carry the forerunner for the Messiah—what an honor indeed!

When Mary arrived, Elizabeth felt the baby leap in her womb and was "filled with the Holy Spirit" (Luke 1:41). I imagine that her five months of seclusion and time to reflect upon this blessing from God helped to prepare her to recognize the Messiah carried in Mary's womb. After all, who was she going to talk to? Zecharaiah, who had been struck silent by the angel Gabriel? Mary's visit was a welcome one, I'm sure.

Both Mary and Elizabeth chose to respond to God's working in their lives with acceptance and joy. They surrendered their own plans, their own desires, and submitted to God's will.

What impresses you most about Mary and Elizabeth's examples? What other true women of God do you think about at Christmastime?