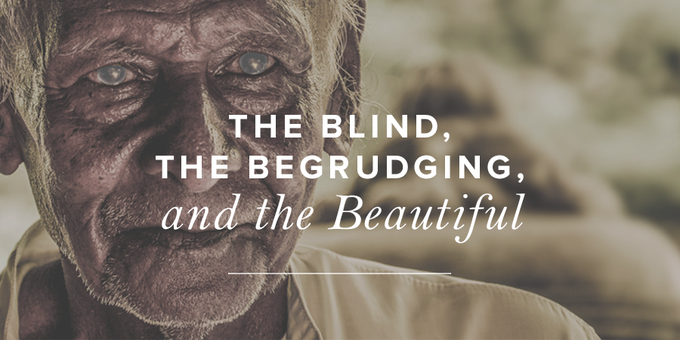 The Blind, The Begrudging, and the Beautiful

He was a blind man. A beggar. He lived long before Braille and social welfare, so he was probably far more desperate than the homeless man who holds a cardboard sign outside your car window.

He begged in order to eat. He scrounged to survive.

But then one day there was a stir on the street, and the blind man inquired as to the cause. “Jesus is passing by,” came the answer. And the man knew that after a lifetime of helplessness, this was his one chance at hope.

His was a cry that came from the marrow of soul: “Jesus, Son of David, have mercy on me!” And because the crowd could not understand what it was like to live in darkness and destitution, they harshly hushed him.

But a rebuke could not silence his desperate hope. So he called out more loudly,

And to the astonishment of the hushers, Jesus invited the blind man to come near. Not only that, but He asked him, "What do you want me to do for you?"

Blind man, begging man, what do you want the God of the universe to do for you?

He dared to ask for a miracle.

He wanted to see.

Sight would mean he could live, really truly live. No more begging. No more groping about in the dark.

I have been Bartimaeus.

You too, dear one? Do you recognize his desperation, his cry for mercy, the insensitive crowd? Do you also have limitations that make you feel like an outsider?

I don't have a permanent handicap and have never experienced true poverty. But I have known what it is to have socially awkward limitations. Due to years of insomnia, panic attacks, and depression, I have to guard my evenings, sleeping habits, and schedule. And because of a variety of chronic illnesses my son and I struggle with, even catching a simple cold can mean weeks (or months) of health complications for us.

I’ve had to fight shame over admitting, “Evenings are difficult for me, so we'll need to leave early," and "We're sick . . . again.” Sometimes it can feel like a handicap of sorts, a relationship-buster, a crowd-upsetter.

Not everyone can understand, and I don't blame them. (I wouldn't get it either if I weren't walking in these shoes.)

I would miss out on Him.

There He stands, ready to show Himself to me, to act on behalf of me as I wait for Him (Isa. 64:4). Where I am physically, emotionally, and spiritually needy—where I cry out for His mercy—that's where I see Him working most powerfully in me. At times I am almost breathless at His goodness to me, a beggar.

But before I sound even remotely like a victim, let me quickly confess . . . I have been the crowd, too. Resentful of another's weakness. Short on grace for their shortcomings. Eager to hush their hurts.

Get over it already!

Why can't you trust God with this?

Truth is, sometimes we don't like each other in our desperation. Not many of us are the best versions of ourselves when we are needy. Our infirmities can keep us from fulfilling each other's hopes or wants, and there's hurt and frustration.

But look at Jesus' tender response to a man of frailty, and let it be our model. The impatient ones who cannot accept your limitations? Be tender toward them. The loved one who isn't handling her sufferings well? Be tender toward her.

Perhaps your tenderness to their weakness will be the healing touch of Jesus in their life. So don't take their reactions personally. This is, after all, not about us. This is about Him. He is doing something breathtaking behind the scenes, and we are blind to it till He shines His light and says, "See! Look what I have been doing all along!"

Are you longing to be married, dear one? Are you barren? Sick? In a bad marriage? Burdened till you feel you might break? Does this holiday season cause you to feel like a social misfit?

Wait for God, dear one. Bartimaeus was blind and begging for years before Jesus walked by, but God had a miracle in mind all along—a miracle that would cause both the blind and the begrudging to praise Him.