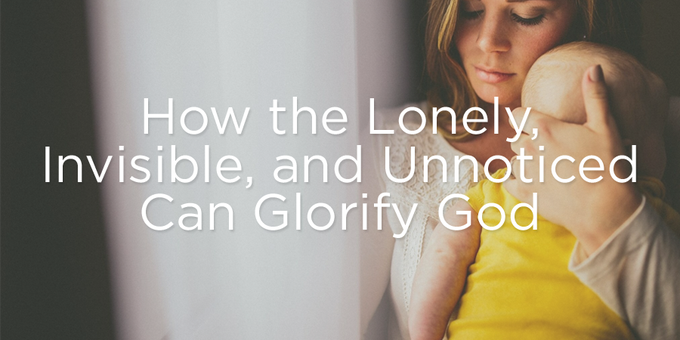 An eighty-year-old woman joined our women's Bible study today after twenty-five years of caring for her ill husband. Over the past five years, he has required her constant care and company, so she hasn't had the opportunity to attend Bible studies or to serve in the church. He died in January. So here she is stepping out into the world again, sitting down with her open Bible amongst new friends.

She said that during those years of serving her husband in the privacy of their home she didn't see the great worth of her sacrifice. She was just doing what she had to do—upholding the vow "in sickness and in health."

Now that her quiet work at home is done and her dear husband is in heaven, God is showing her that the daily choice to serve just one person really was eternally significant.

She spoke of God's goodness and gave thanks for His many acts of love over the years.

I savored the wisdom flowing from this woman—this strong woman who now shines like gold and glorifies God in a way I can only admire.

Afterward, I sat down next to her and said, "Thank you." I'm a mother to a household of children, and I often feel invisible. I feel forgotten under this little roof as I toil and serve day after day. I often feel like my influence in the world is so small, though I dream of serving God in big, significant ways.

Most days, I simply cannot serve in any other way. I am divinely limited by my calling to serve four little children and one husband.

That's often the extent of my capacity. I do understand the eternal value of my children's souls, I adore their company, and I believe in the goodness and virtue of my calling as a wife and mother. I know the days are fleeting, and I savor motherhood.

Nonetheless, it often feels quite . . . quiet.

A Calling for All Christians

This beautiful eighty-year-old widow entered my life today to remind me that this calling of humble, invisible service is not just for young mothers. It's a calling for all Christians.

At one point or another, we're called to serve God in hidden ways. He may call us to serve in this way for one year, eighteen years, or twenty-five years. It is a calling for men and women of all ages, all educational backgrounds, all career expertise, and all spiritual gifts.

Each one of us will serve God privately much more than we ever serve Him publicly.

This is our calling.

It just so happens that in our Bible study, we are discussing the book of Esther from the Old Testament. It's the one book that was included in the Canon under serious controversy because it does not mention God.

Everything about Him is disguised, so that upon a first reading it appears as if He were absent. Even the mention of Esther's "fasting" leaves out the mention of "prayer," which otherwise is always fasting's inseparable sister.

One look at the book of Esther and it seems as if God is invisible, forgotten. And yet a closer examination of the text reveals His unmistakeable presence. His handiwork is everywhere throughout the circumstances of the story, and He works tirelessly, intricately, and perfectly through common humans to preserve His people.

The book of Esther teaches us that God is often—even today—invisible yet involved, hidden yet here, silent yet sovereign.

My heart skips a beat when I think that God Himself not only identifies with my feelings of invisibility, but He also exemplifies them. When I choose to serve the Lord gladly and privately—without notice, without acclaim, without credit—I am glorifying part of His character. What a privilege!

In our culture, our value seems to depend upon publicity. We are tempted to evaluate our work according to compensation, audience, or praise. Let us not have our heads turned by this temporal and inaccurate feedback. Instead, may we fix our eyes on Jesus and commit wholeheartedly to the work He establishes for us to do, even when it is hidden.

This will be eternally significant as we live side-by-side with people who cannot see God or recognize His work, so they assume He is not here.

Whenever you serve God in uncelebrated, private ways, you are mysteriously demonstrating to the world that God may seem invisible, but He is truly and lovingly at work amidst mankind . . . even in the small secret chambers of our human hearts.

In what "hidden ways" has God called you to serve Him today? How can you glorify His character through that work?

Serving in Small Places on Sunday