The late Elliot (1926-2015) was a prolific Christian author and speaker whose first husband, Jim Elliot (1927–1956), was one of five missionaries killed as they sought to make contact with the Waodani Indians (an unreached people in Ecuador known for their violence). Soon after, Elisabeth and her then two-year-old daughter Valerie moved among the same people, spending two years sharing the Gospel with and befriending those who killed her husband.

After her return to the U.S., Elisabeth began a speaking and writing ministry, writing over twenty-five books and eventually becoming the first female bestselling Christian author and one of the most influential Christians of the twentieth century. 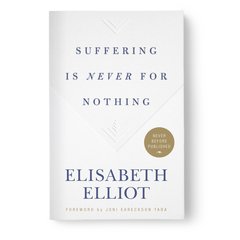 Suffering Is Never for Nothing